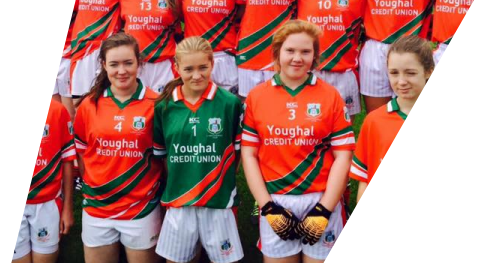 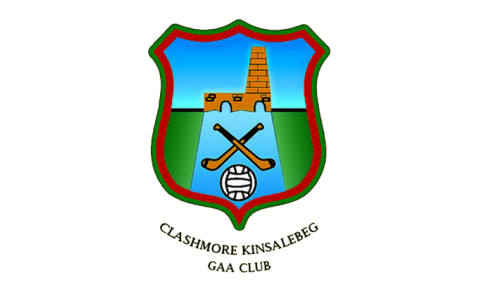 Ladies Football, in this area, first started in the late seventies at Mount Stuart cross in Jim Walsh’s field. Some of the families involved were the Sweeneys, Salmons, Shalloes and Mary Walsh of Ballinameela. This sparked an interest in ladies football in the national schools of the parish. Teams were started in all three schools in the parish and some fiercely contested matches were witnessed. The club Kinsalebeg/Clashmore was formed in the early eighties so named because Kinsalebeg contributed more players than Clashmore. This club reached two junior county finals and played in many festival tournaments which were very popular at the time. Sean Casey’s daughters played for the club until it disbanded in the mid-eighties. They moved on to Ballymacarbry where Catriona rewrote the ladies football record books. She won countless All-Ireland titles with both club and county and holds the honour of being the first ladies footballer to score a goal in Croke Park. We in Clashmore are all very proud of her achievements.

The Club reformed in 1992 under the stewardship of Jimmy O’Rourke. Dan Leahy attended a county board meeting and got permission for Clashmore Ladies to participate in that year’s championship. The club went on to reach a county ‘B’ minor final that year under the guidance of Jimmy O’Rourke & Conor O’Riordan. The club continued to compete through the nineties with Alice Fitzgerald (Sweeney) and the O’Rourke sisters Sinead, Deirdre & Fiona always present. In 1997 the club won it’s first title, the U-16 ‘B’ county title. The team was backboned by Maura Lombard, Maire Hickey, Ciara Dower, Mags Foley and Cliona O’Keeffe. The following year was a great one for the club. Clashmore won their first adult county title, the Junior county title against Old Parish in Ballymac. Stars on the day were Ber Lombard, Sinead & Deirdre O’Rourke, Helen O’Neill, Alice Fitzgerald, Cliona O’Keeffe, Anna Beresford and a young Mary O’Rourke. The club went on to reach the Munster Junior final and also defeated the Brickeys in the league final. In 1999 the club had a proud moment when star player Deirdre O’Rourke won a Senior All-Ireland medal with Waterford, playing at centre back. In 2002 Jonathan & Jim Flavin along with Barry Dunne took over the training of the Junior team. The club went on to win it’s second county Junior title that year winning a tough final against Comeragh Rangers in Lemybrien. Stars on that day were the heroic Maire Hickey in goal, Sinead O’Rourke, Deirdre O’Rourke, Grainne Nolan, Cliona O’Keeffe and the electric Mary O’Rourke who hammered home countless scores.

The following year the club headed to Dublin for the All-Ireland Intermediate 7-a-side competition. The panel on the day was Deirdre O’Rourke who was the only player to play every minute of all six matches on the day, Sinead O’Rourke, Fiona O’Rourke, Anna Beresford who was “catlike” in goal, Sarah Flavin, Grainne Nolan, Claire Marks, Aishling O’Donnell, Cliona O’Keeffe, Edel Wilson, Alice Fitzgerald, Geraldine Daly, and Mary O’Rourke who scored a total of 23 goals on the day. After six hard matches and surviving a penalty shoot-out the club was crowned with All-Ireland glory. The following year Mary O’Rourke was named on the All-Star panel for her performances with the county team.

Though there was a bit of a lull in the early noughties the strong underage structure went on to feed another strong adult team in the 2009 season where the Junior title was again secured. When we beat Tramore in 2010, we went up to Intermediate level and the following year, 2011, beat St Pat’s to go up to Senior.

Over the years Clashmore/Kinsalebeg ladies has consistently produced players of a high calibre, many underage girls have gone on to represent Waterford County and 9 girls have worn the county jersey in the adult grade namely, Mary O’Rourke, Deirdre O’Rourke, Clíona O’Keeffe, Edel Wilson, Aileen Barron, Trish Fitzgerald, Ashling O Donnell, Margaret Foley and Jess Fitzgerald. For a small rural community, this is an amazing achievement. The big focus is on the underage teams at present to have strong foundations and sowing the seeds for success in the not too distant future.