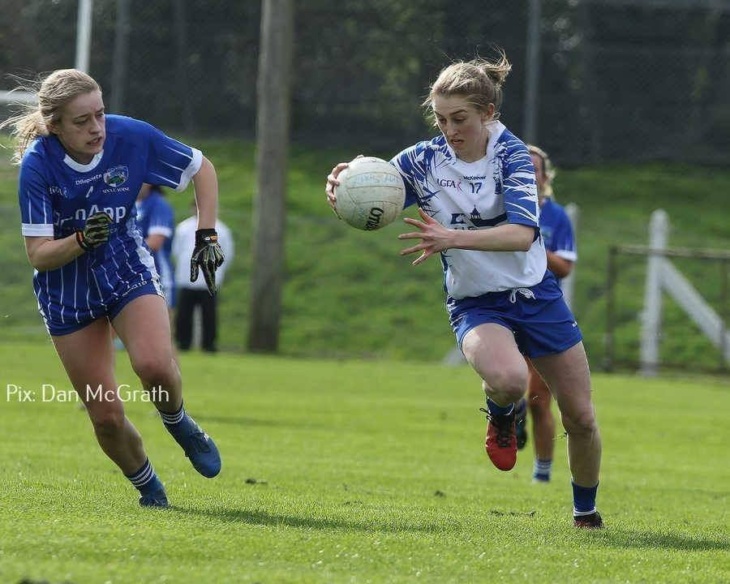 Waterford survived a late comeback from a Laois side that are bottom of the table in this year’s Division Two of the National Ladies Football League at Fraher Field on Sunday last to all but secure their place in the semi finals for the second year in a row.

Waterford for much of this game looked to be the better of the two sides and looked to have this game well and truly won with a quarter of the game played, but no game is over till the final whistle is sounded and in the seven minutes of stoppage time played at the end of the hour, the visitors were somewhat rewarded for never throwing in the towel.

Waterford won the toss in this game and opted to play against the stiff breeze which blew into the town end of the ground, and the home side got off to a dream start with two goals with the two first two attacks of the game.

There was just 34 seconds played when Waterford had the size 4 in the back of the Laois net. Wing forward Garryowned an effort in front of the Laois goal and was on hand to collect the ball as it dropped back down from the sky and cooly finish past Fiona Kelly in the visitors goal.

Laois responded with a point from a Mo Nearey free and from the restart Waterford again attacked down field and Kelly Ann Hogan finished to the net less than 90 seconds after Waterford hit their first goal.

Eimear Fennell from a short Maria Delahunty ’45 raised Waterford’s first white flag of the game to put six between the sides once more.

So much were Waterford on top in the opening quarter of this game each time that they attacked the Laois goal a score looked on but sadly from a Waterford perspective the efforts fell just short, went just wide or the attacking player was blown up for over carrying the ball.

Aileen Wall edged Waterford further in front on 12 minutes and it was at this point that we saw the pressure that Laois were under as they made their first change of the afternoon.

Mo Nearey got her second just short of the half way point in the first half and she struck a third on 19 minutes to leave 5 between the sides.

Maria Delahunty extended Waterford’s lead once more on 20 minutes but almost straight away Mo Nearey again pointed this time with the help of the upright. Maria Delahunty from a free restored a six point lead for Waterford before Caoimhe McGrath who is showing signs to be Waterford’s best full back since Martina O’Ryan filled the number three shirt back in the 90’s was forced off with a hand injury with 27 minutes played.

Chloe Fennell extended Waterford’s lead on 28 minutes and three minutes later Liz Devine got her name on the score sheet to pit eight between the sides.

But in the time that remained the visitors hit two more scores the first a goal from Mo Nearey after some good work by Erone Fitzpatrick in the third added minute at the end of the 30 and almost straight away Shannon Costello pointed to leave her side trailing 2-5 to 1-4 at the break.

Caoimhe McGrath was able to come back on for the second half and with the wind at their back’s Waterford started brightly. Maria Delahunty put over the first two scores of the half to extend Waterford’s lead but they were cancelled out on 36 minutes when Mo Nearey finished past Rosie Landers from a tight angle after some good work by Erone Fitzpatrick.

Eimear Fennell split the posts with a free on 40 minutes, but we had to wait a further 10 minutes for the next score which came from a penalty after a foul on Chloe Fennell. Regular free taker Maria Delahunty took the ball in her hands to strike the resulting one on one which she slotted past Fiona Kelly to give Waterford a 3-9 to 2-5 lead, referee Jonathan Murphy had to step out the 12 metres from under the Laois crossbar as the 12 metre spot was not clearly marked.

The Abbeyside Club player put over two more frees before Aileen Wall a late call up for Michelle Ryan on the published team which game Waterford a 3-12 to 2-5 lead with 54 minutes played.

Katie Hannon who played in goal for a number of years in recent years came on as a sub after Aileen Wall’s effort and within three minutes she got her name on the score sheet with a point and seconds later she had the ball in the Laois net for the fourth time in this game to give Waterford what looked like an unassailable 4-13 to 2-6 lead.

Laois however were not going to give up without a fight and on the hour mark Mo Nearey finished to the net for her third goal of the game and moments later Erone Fitzpatrick split the posts.

In the fourth minute of added time Alice Dunne finished to the net leaving six between the sides, and with no one to indicate how much time remained Waterford at this point were starting to sweat. Three minutes later Laura Nearey split the uprights to leave five between the sides, but soon afterwards a nervous end to this game for the Waterford defenders came to an end.

Waterford’s last game of the round robin section is in two weeks time away to Clare, where if Ciaran Curran’s side as would be expected will win and Armagh were to lose out to Wexford (an unlikely event) then Waterford would top the group and play who ever finishes fourth in the group. Should Armagh beat Wexford and Waterford beat Clare they will play the third team in the group in the semi finals which possibly will be Kerry.