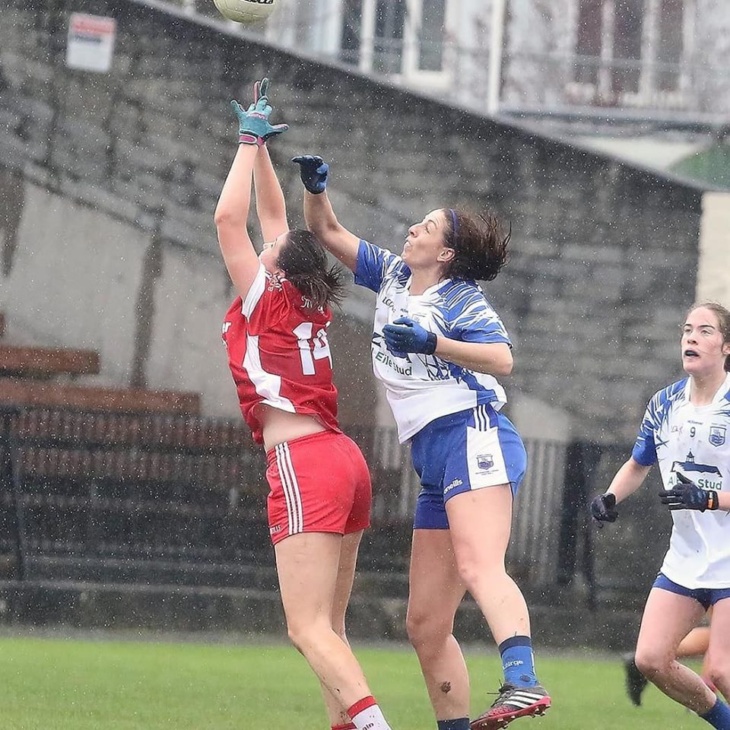 The playing conditions in the Fraher Field may have been atrocious but the commitment from both teams was wholehearted as they served up an entertaining spectacle despite the adverse weather. Tyrone were playing with the wind and rain in the first half but were slow to make use of the advantage as both teams struggled to come to terms with the slippery surface. An innocuous ball into the Waterford area led to the opening score in the 8th minute. The Tyrone player went to ground after a home player lost her footing while making a challenge. The referee had no hesitation in pointing to the spot and  Grainne Rafferty had no hesitation in confidently placing the ball into the top right hand corner beyond the grasp of Rosie Landers in the Waterford goal. Waterford worked an opportunity to equalise soon after but Tyrone keeper Shannon Lynch raced off her line to smother the goal-bound shot. Tyrone continued to have the best of the chances on offer. Niamh O’Neill went close to extending their lead when her attempt at a point smacked off the post before being scrambled clear by the diligent Waterford defenders marshalled by Caoimhe McGrath. Maria Delahunty finally opened the Waterford scoring with a pointed free in the 14th minute. O’Neill retaliated with a Tyrone point before Eimear Fennell and Delahunty responded for the Déise girls from dead ball opportunities. Waterford were doing well to stick to Tyrone despite the inclement weather conditions. The football may not have been pretty at times but it lacked for nothing in terms of effort. The one moment of individual brilliance to light up the first half came from Tyrone’s Emma Jane Girven who capped a surging run from midfield with an excellent long range point despite the attentions of several Waterford players.  Waterford’s 29th minute  reply may have been more prosaic but it was of equal value as Delahunty slotted over her 3rd free of the half. Waterford had done well to keep Tyrone within a point as half time approached. In the 30th minute Waterford goalkeeper Landers ensured that the Tyrone lead was kept  to the minimum at the break. A high ball into the goalmouth was fisted on by a Tyrone forward and Landers had be at her best to avoid being embarrassed as the ball skidded off the turf. The teams retreated to the comfort of the dressing rooms with the score standing at Waterford 0-04 Tyrone 1-02.

Tyrone started the brighter in the second half, Gervin pointing almost from the throw in. The impressive Kate McGrath finally got Waterford’s first point from play 3 minutes after the break. Waterford were growing in confidence but were having difficulty breaking down Tyrone who were playing with 11 behind the ball. Fennell and Kelly Ann Hogan’s pointed retorts to Niamh O’Neill’s free for Tyrone left the game even stevens after 40 minutes.

The game’s turning point came in the 44th minute. A wind assisted Delahunty 45 dropped earthwards towards the Tyrone goal. Michelle Ryan made a great effort to flash a fist at it and while she didn’t appear to make contact she did enough to distract the Tyrone goalie from making the save. Tyrone’s pocket had been picked and Waterford enjoyed a 3 point lead. Gervin scored a point from play to reduce the Deise lead, but Ballymac’s Ryan was now up for the battle and replied with an imperious point of her own. The fresh legs of Cora Murray, Shauna Dunphy and Lauren McGregor were introduced as Waterford sought to put the game beyond the O’Neill county. A further point from Fennell brought the Waterford lead to 4.

A 55th minute yellow card for Waterford livewire Katy Hayes gave Tyrone hope, McCaffery’s point from the resulting free skidded over off the crossbar causing palpitations among the onlooking Waterford supporters. Waterford’s midfield finally got relief from their tormentor Gervin when she was shown yellow in the last minute of normal time.

Waterford were perhaps a bit too adventurous in seeking to finish the game off with a score. They had to rely on interventions from Chloe Fennell and an intelligent soccered clearance from Kelly Ann Hogan to rescue them when they were stretched at the back. 2 minutes into injury time Tyrone broke once more with purpose and worked a shooting chance against the outnumbered Waterford defenders. The ball was struck with venom  but only found the outside of the Waterford upright with the keepers hopeful dive beaten. The visitor’s Aoibheann McHugh still had time to score a point from play before the referee blew his whistle but this was to be the last significant act in this enthralling encounter. Waterford had battled the wind, rain, cold and Tyrone to record a two point win.